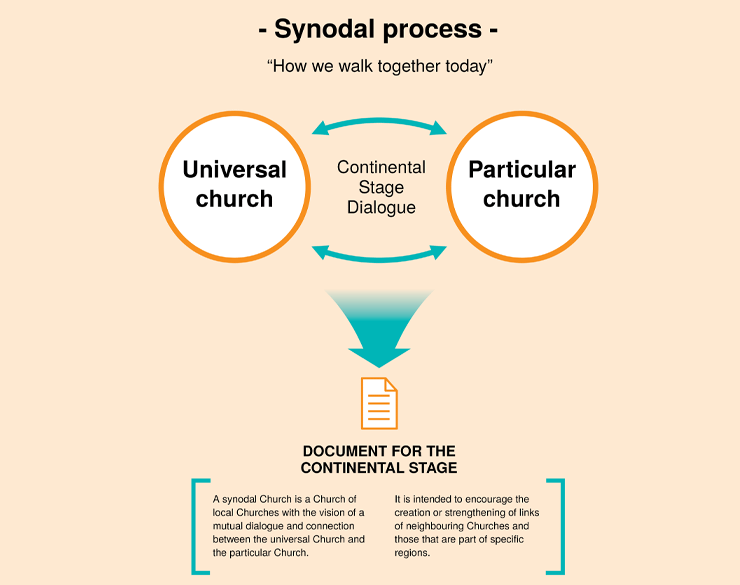 Some 30 theologians, pastoral workers and bishops gathered from 22 September to 2 October at Frascati near Rome to draft the working document for the continental phase of the Synod. The document is referred to as the Document for the Continental Stage (DCS). It brings together the syntheses submitted by Bishops Conferences, religious orders, Catholic organizations, movements, dicasteries and others.

The Synod Office received 112 submissions from the 114 Bishops Conferences in the world which is unprecedented.

The DCS will be released in Rome on 27 October. It will be the subject of reflection and discernment in the continental gatherings. These gatherings will each produce their own document, which will be used by the Synod Office to draft the working document for the October 2023 Synod Assembly.

Some continents are able to have ecclesial assemblies involving bishops, priests and lay people gathering together. In Oceania this was judged to be too expensive and difficult, so a different process has been developed. To ensure that the response to the DCS is ecclesial and includes substantial clergy, religious and lay input, there will be a reflection and discernment process on the DCS in the dioceses of Oceania. The responses will be synthesized into one synthesis from each of the four Bishops Conferences. A Discernment and Writing Group will convene for a week in January to create one document which will be the continental draft for consideration by the Federation of Bishops Conferences of Oceania at its Assembly in February. The final version approved by the Assembly is to be submitted to the Synod Office in Rome by 31 March 2023.

Aotearoa reflection and discernment on the Document

The reflection and discernment process needed for the Document for the Continental Stage (DCS) is more limited than that carried out for the diocesan stage, but it needs to include groups such as religious orders which had their own processes in the previous stage. Only groups are being invited to take part, and there will be no individual responses.

The timeframe is relatively short, end of October to the first week of December.

The process is limited to representative groups, with some attention to be given to involving those groups whose voices were not heard strongly in the diocesan phase.

To cope with the short timeframe, groups are being asked to incorporate their reflection on the DCS, if possible, into their normal meeting schedule, or to convene a group for the purpose in person or by zoom. They are being asked to use the Spiritual Conversation process or another discernment process, rather than simply discussing the document. Many people will be familiar with the Spiritual Conversation process from the earlier stage.

Dioceses will involve their own diocesan groups, receive their responses, and discern the key themes for their diocese.

There will be an online Preparatory Event in November organised by the Federation of the Catholic Bishops of Oceania (FCBCO) ahead of their meeting in Suva, Fiji in February 2023. Pope Francis has also announced that the Assembly Meetings of the Synod of Bishops on Synodality will take place in two sessions, one in October 2023 and the other in October 2024.

The Preparatory Event Our Ocean Home has been scheduled for two hours on each day of November 28th, 29th and 30th from 5pm to 7pm NZ Time.

This scheduling allows all participants to engage with and experience an online process of listening, discerning and conversation together. Please note that the sessions are not repeated but rather explore a different theme each session on Our Ocean Home.

The style and format of the Preparatory Event will be framed by processes of storytelling, reflection and theological dialogue, akin to cultural experiences of Talanoa or yarning circle style conversations.

In the spirit of the synodal process, this event is open to all. Registration is now open.

FIND OUT MORE AND REGISTER HERE

MORE ABOUT THE CONTINENTAL STAGE

“We recall that the purpose of the Synod, and therefore of this consultation, is not to produce documents, but “to plant dreams, draw forth prophecies and visions, allow hope to flourish, inspire trust, bind up wounds, weave together relationships, awaken a dawn of hope, learn from one another and create a bright resourcefulness that will enlighten minds, warm hearts, give strength to our hands.”

STAGE ONE: DIOCESAN AND NATIONAL

From the peaks of Maungā (Mount) Ruapehu and rays of the rising sun, the name ‘Te Reo o Hewa’ was gifted to this synodal process and to the diocesan synthesis document.

This name was gifted following a gathering of families at Mihiroa Marae, in Pakipaki, for the Hinepuaraurangi Rā Wairua (a form of retreat). This gathering is connected to the Māori movement of Māramatanga, and has taken place in Pakipaki for 35 years. The Marae is where Māori can go to express every part of our being.

“The Rā is a day set aside to give thanks and share dreams and aspirations, and to help bring them to fruition. We pray, sing, dream, eat, and celebrate miha (mass), and five mokopuna (young people) were baptised. The hardest part of our Rā is that we have to say goodbye.”

This Rā is named after Hinepuaraurangi, which in Greek is the star called Atik, part of the Perseus constellation. There is a smaller cluster surrounding this constellation that is called Te Paki o Hewa/Te Paki o Hiwa.

This name is about giving light to the dreams and aspirations that have emerged from the local synodal process, which took place under the southern skies and with these stars overhead.

Where to from here?

Many people have been involved in this unique synodal process from across the Diocese of Palmerston North. This includes those who prepared the local process, those who organised groups to gather for a Spiritual Conversation and make a submission, those who promoted the process in their community, those who enabled our primary and secondary school students to participate, those who read each submission in a spirit of discernment, those who represented part of the diocese at the Pre-Synod Hui and those who drafted the synthesis document.

These people, through their participation, reflect the diversity of the Diocese of Palmerston North (including in their ethnicity, age, gender, vocation and connection to the Church).

The diocese wishes to thank all participants for opening their hearts and minds to the Holy Spirit and engaging in this process.

The process and those who have been involved is outlined in more detail in the Diocesan Synthesis and various appendices.

The Pre-Synod Hui was held a fortnight prior to finalising the synthesis document and was a significant part of this synodal experience.  The purpose of the hui was to come together to pray, listen, reflect and discern on themes that were emerging from the submissions. Due to restrictions on numbers, representatives were invited to this hui, which aimed to be a gathering of a representative cross-section of the people of the diocese.

Participants offered reflections on understandings of synodality and after being presented with the emerging themes, began to explore how the people of the diocese are being called to respond. Some of the practical suggestions that had emerged through the submissions were integrated into the day. This resulted in an experience of small group sharing opportunities, the use of both Māori language and cultural practice, tikanga, and concluded with an interactive celebration of the Eucharist. Overall, there was a strong sense of the Holy Spirit throughout the day.

Collection of the various resources produced during the Listening Stages to enable participation in the synodal process.

This translation of the prayer has been made available and shared with permission from the Diocese of Auckland.

The NZ Catholic Bishops Conference compiled a National Synod syntheses document from the diocesan phase of the Synod 2023 process and the national hui held in Wellington in June to synthesise the diocesan documents.

Six strong themes have emerged from the diocesan and national Synod processes undertaken in the Catholic Church of Aotearoa New Zealand – Inclusion, Gathering, Leadership, Education and Formation, Mission, and Synodality and Change.

The role of women, biculturalism, and abuse in the Church cut across those six themes.

Togetherness in faith and purpose

These carvings are from the entrance to Te Rau Aroha, The Diocesan Centre in Palmerston North. This centre is a place of work, gathering, training, formation and celebration and the carvings illustrate the connection with the Mana Whenua (home people) of the region, Rangitane.

A new age is expressed by the use of the traditional (red, white and black) and more specifically the new colours. This symbolises the ever evolving nature of the church, the faith and our diocese.

The apex of the carvings, pictured here, represents the people embracing Christianity. This is represented by a figure representing the people, Māori and settlers, who have come to embrace Christianity.