Margaret Broderick began as Bishop Peter’s typist in 1986 and took over as secretary from Carol Myres several years later. She has many memories of the formation of the Diocese, and of working for Bishop Peter until his retirement in 2012.

I remember I sang in the choir at Bishop Peter’s ordination. And I remember we went down to the Pastoral Centre afterwards, and they had a huge powhiri there welcoming him in as Bishop. There were hundreds of people there. It was a big day.

When he first was appointed Bishop, he lived at the Pastoral Centre. It was a big house on Ihaka St in Palmerston North that had originally belonged to the Franciscan friars. When they left the Archdiocese of Wellington bought it, and we inherited when we became the Diocese of Palmerston North. Bishop Peter set it up as a Pastoral Centre. They held retreats and conferences and all sorts of things, like we do at the Diocesan Centre now. They used to have a lot of weekend-long events, and people would come from all over the diocese; but as things changed people weren’t wanting to travel for the whole weekend. So the team started going out to the parishes, which meant the Pastoral Centre wasn’t being used, and it was becoming a liability because of the maintenance, so it was sold.

During Pope John Paul II’s papal visit in 1986, the New Zealand bishops were also visiting Australia when the Pope was there. There was a lot of banter about how Bishop Peter would have to wear his mitre while he was there – which he hates – and the zuchetto, the little cap. I had some purple material that was about the right colour, so one day when he was away I went home, and I made a little zuchetto and brought it back to work, and we got some string and threaded corks all around it for him to take to Australia. And he actually took it! And when the bishops were all getting dressed ready to meet the Pope, he put it on. He had to take it off before they met the Pope, but they all enjoyed the joke. I think he’s still got it somewhere! 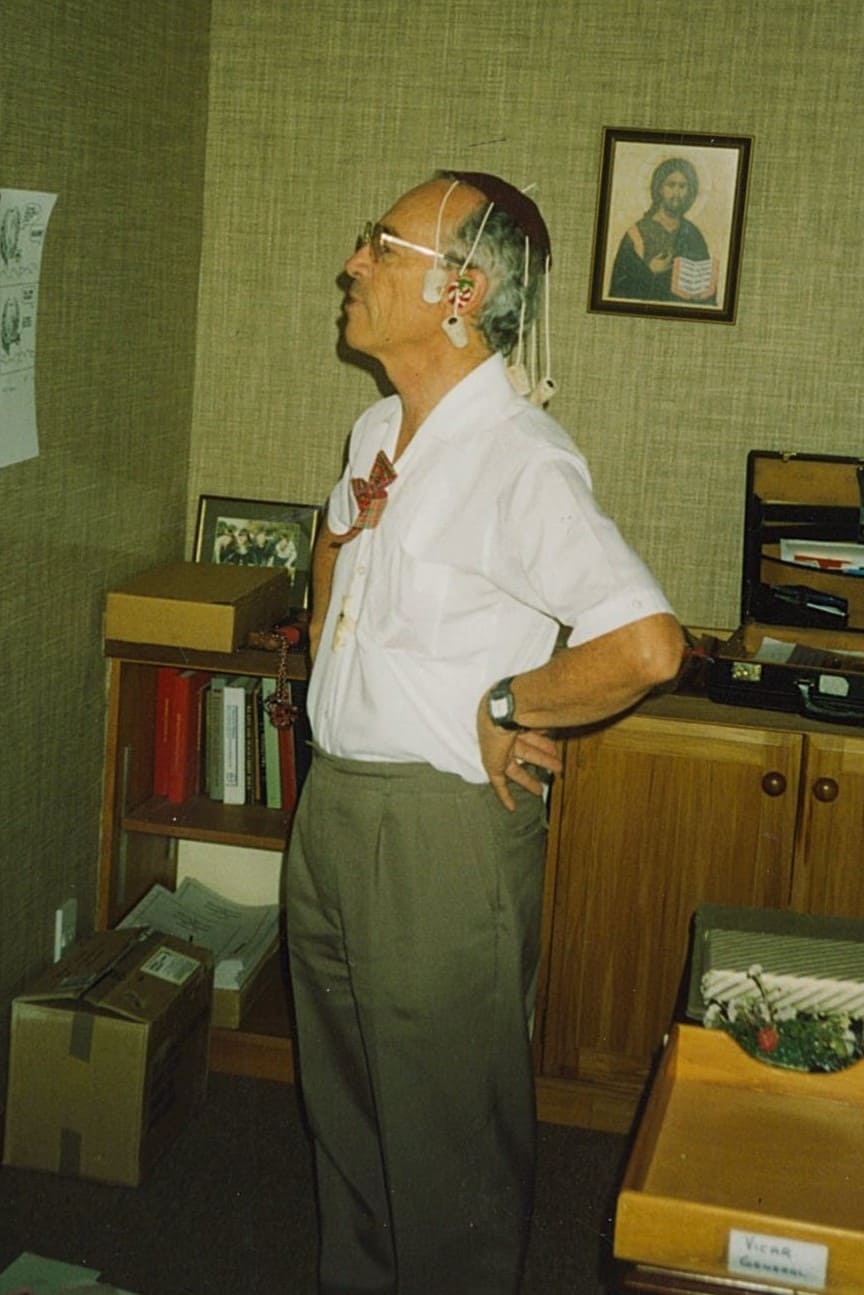 Bishop Peter with the ‘Australian’ zuchetto made by Margaret

He was very work focused. He used to go on holiday with Father Sean Hurley and Father Dave Bell. They’d go up to Taranaki, and he’d always take his typewriter with him. And the others would be out enjoying the sun, sitting out there having a drink – and Bishop Peter would be inside tap-tap-tapping away. They hid the typewriter one day because he wouldn’t stop working.

After his heart attack he was told to slow down, so he cut his hours back. But that didn’t stop him. He used to get tired and had to go home for a rest every day. But he was still getting quite worn out, and his doctor said, “It’s because you’re doing too much. You’ve got to cut your hours down.” He was advised that he should work out a schedule of how to give himself more recreational time and plan out his work. So he chose a group of people, including Sister Teresa Hannigan, Bishop Owen and myself, and we were supposed to meet regularly to plan his schedule. We met one morning, and we’d written down some suggestions, and Bishop Peter took one look and said, “I can’t follow that, you’ve given me too much time off!” We didn’t meet again after that!

In 2006 he was appointed a Companion of the New Zealand Order of Merit, for services to the community. Wendy Silver, Larry Forentine and I went down to the ceremony, as well as Bishop Peter’s brother. He was allowed to take six people but he didn’t have any other family in New Zealand. That was quite a memorable occasion – we sat and watched the Governor General present him with his medal, and then we had cucumber sandwiches. One time the bishops were meeting in Auckland, it was a one-day thing so Bishop Peter got a flight in the morning and would be coming back that night. So he left his car at the airport, caught the plane early in the morning and was to pick his car up when he got back at night. But then I got a phone call saying that Mt Ruapehu had erupted and they couldn’t fly back. “I’m going to have to stay the night,” he said, “Can you go and get my car?” So I attempted to do that … But I couldn’t find the car key. I thought I had the key, but it wasn’t the right one. And in the end, I decided to leave it because it was night-time, and I couldn’t work out where the key was. So I left the car there, at the airport.

Back in Auckland the Bishops were all lined up trying to rebook their flights for the next day. There were long queues of people as you can imagine! And the Bishops couldn’t get a flight. So John Dew said he’d hire a car and they could drive home the next day. But that was too slow for Bishop Peter, so he went back to the airport the next day and managed to get on a flight home. He said to me later, “I just couldn’t have stood a journey like that!”

But I hadn’t realised he was flying back, so that morning I came into work and said “I’ve left Bishop Peter’s car at the airport, I’ll have to go and get it because he’s driving back.” Eric White came with me to the airport (I’d found the key by then). And when we got there the car was gone, I couldn’t find it anywhere! And I thought, “I think it’s been stolen. How awful because I left it there overnight.” So I came back to work and said to Paul Finnegan, “I don’t know what to do, his car’s been stolen. I probably should tell the police.” And not long after that Bishop Peter walked in. He’d picked his car up from the airport. So it was lucky I hadn’t moved it after all!